I've got a road trip planned. It's a variation on my failed trip down south a few weeks ago. First stop, a rest area off I-59 in Mississippi. It's 400 miles, six hours away.

The next morning I'll bop down into Gulfport and get me some beach time. I may even hit Ship Island, one of the top rated islands in the U.S.

Later Biloxi, then sleep somewhere. After that, mosey back home at my leisure.

Think I'll leave tomorrow morning. Get up early and do a laundry at the Wishy Washy, put some clean clothes in the back of my truck, grab my electronics, and cameras, and get the hell out of town.

I checked the weather for the next few days, it looks great. And yes, I know Shelby, I'm there, you're gone.

Smoke is smoked, finished it last night. Time to clean up, start again.

Just bought a little bird feeder kit that I have setup where I view the yard from my chair. 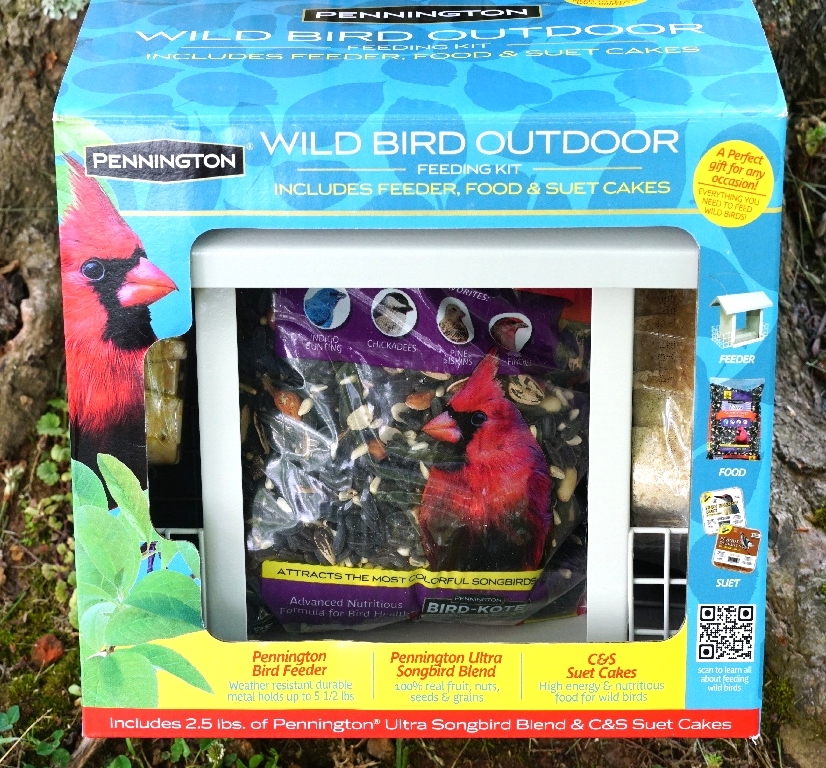 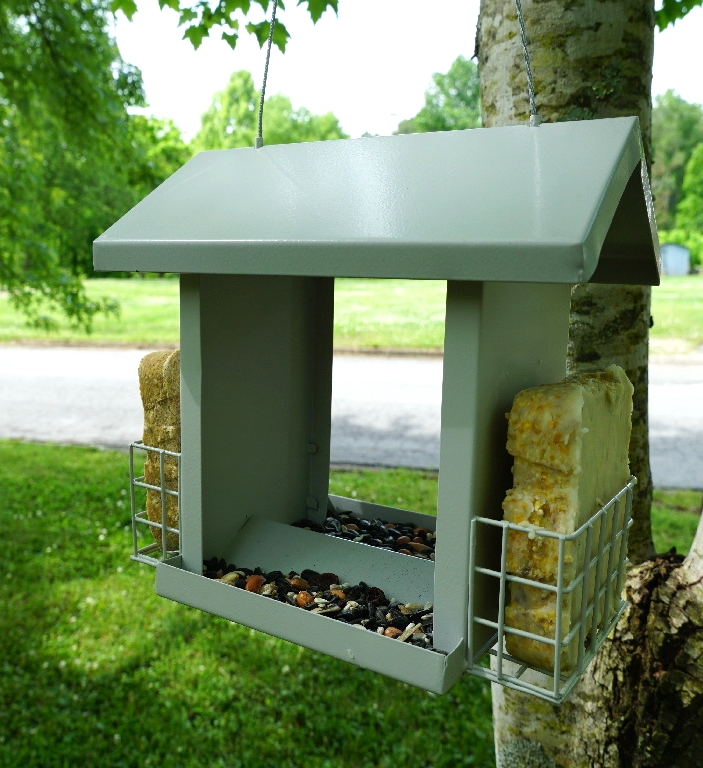 Mid-mornings around here, the sun is fighting to get thru the blossoming trees, to reach it's hungry children on the ground.

Pipers corner gets the early sun, as the canopy on my porch blocks the rest. 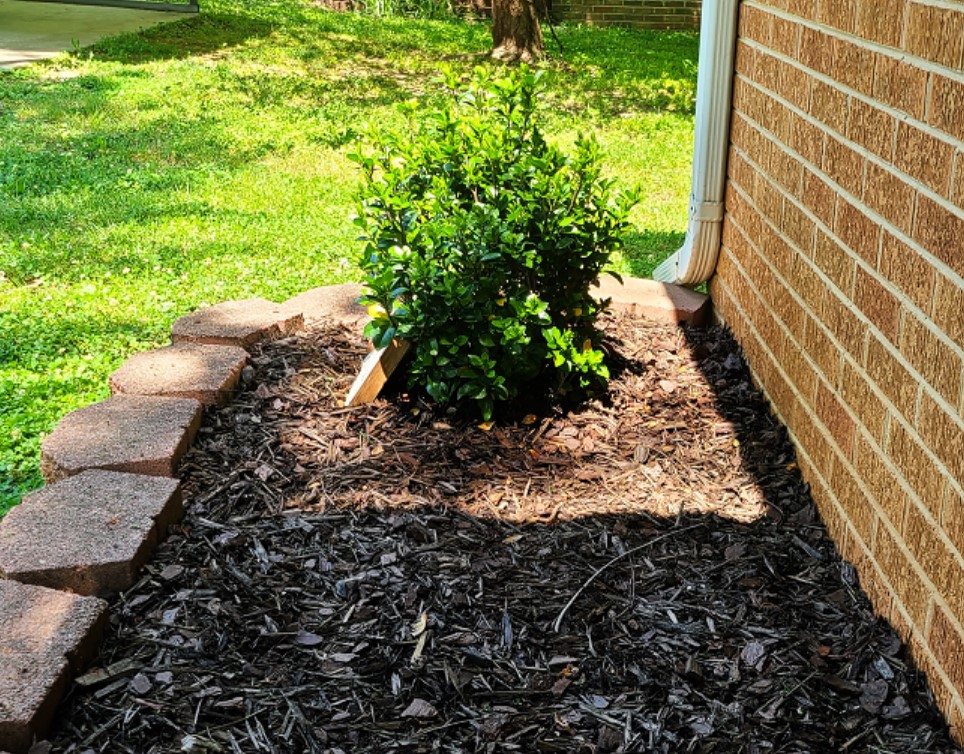 I have one of the original Amazon Echo's, got it early before the public, as part of something I was doing. So I've had an AI as part of my life for a long time, and I've been shelling out for Amazon Prime ever since, because you need access to the monster.

I currently call her Computer and I use her constantly throughout my day, to control lights and my big Roku TV. You can hear me down the block when I scream Computer! Mute Roku! because I'm doing something else and don't have access to my remote, when the fucking My Pillow commercial comes on, at Fox News.

I'm always asking her shit, she's my insanely knowable friend. What's the temperature, what time is it, what is ..., how do you spell ..., everything!

Today, I asked her what the weather was going to be like tomorrow. She told me, and then she said btw, did you know that cat succulent planters for small plants by animal lovers is on sale now?.

She asked if I was interested, I said sure. Then she proceed to give me a sales pitch for a product that incorporates everything that Amazon knows about this old, long standing customer, and his recent purchases. I've bought a lot of cat stuff over the years and I recently was searching plants and fertilizer.

How fucking insidious is this? Anyway, she asked if I would like to put this thing in my cart, and I said sure. Then she told me it had been added, goodbye! Mission accomplished...

So I go to my cart, and there it is. The sappiest most stupid crap you can imagine. Deleted, goodbye!

I love this little artificial intelligence lady that sits next to me, but she works for the monster. 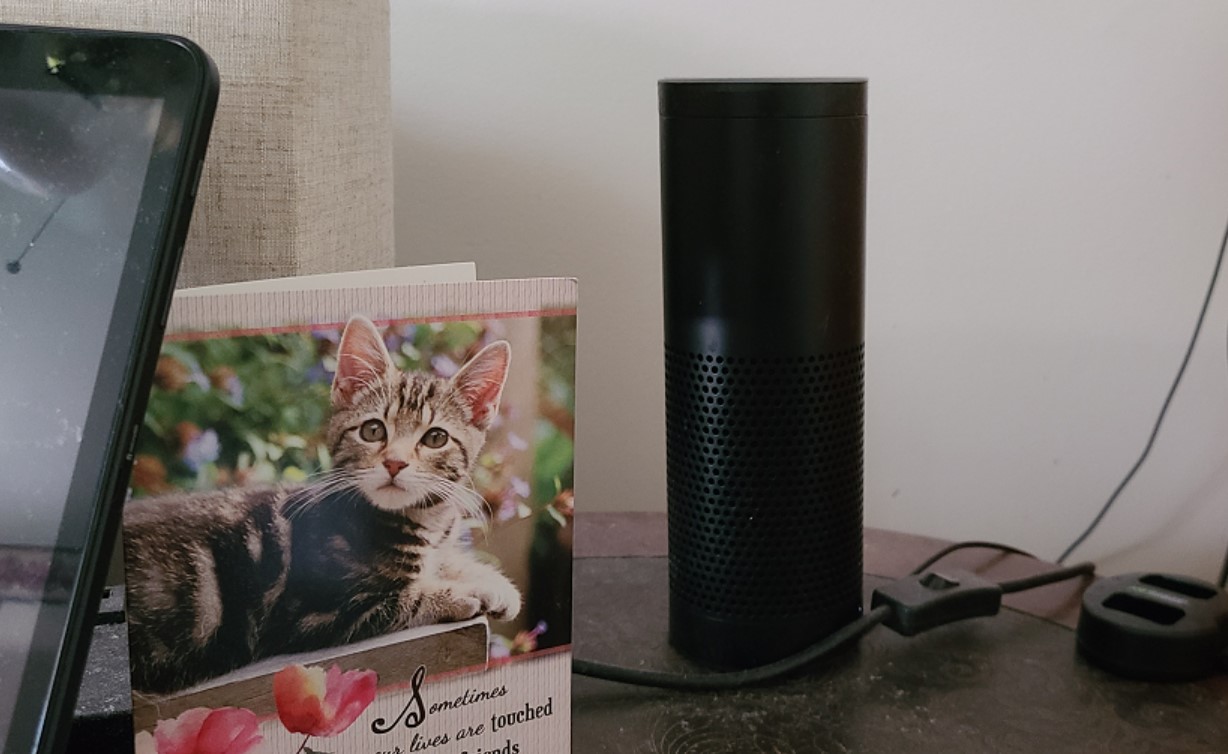 Spent the afternoon down in Muscle Shoals, Alabama today. Went across the Wilson Dam on the mighty Tennessee River, to the Rockpile Recreation Area. 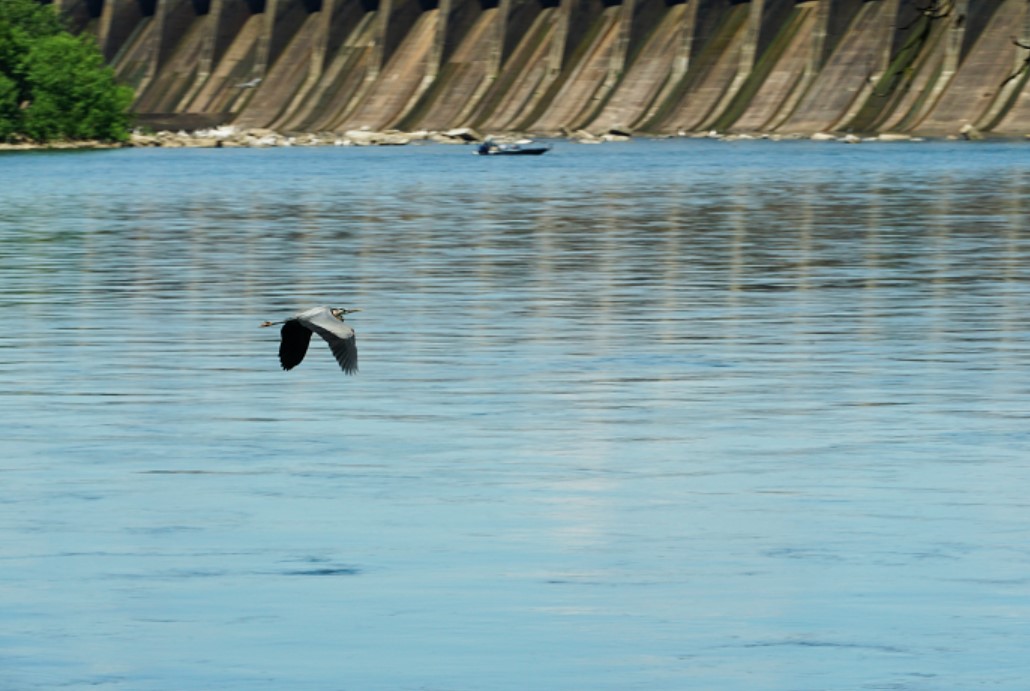 Shot with my Sony and the zoom lens.

I was standing at my sink this afternoon, melting my face because I can, and I'm also a grown ass man making my own choices, that don't affect anybody but me.

Then I thought of Skoge. My buddy, my long standing friend, we shared houses together over the decades, she's seen me through every major relationship I've had since, and we met in 1971. She's three months older than me.

So, I thought how nice it would be to have a phone conversation with her, as I sit here peacefully in Tennessee with my front door open, on my dead end street, fan on, and my feet kicked up.

The problem was, Skoge and I have not been in a phone conversation for a very long time, just social media. The last time I saw her and Grant, was maybe ten years ago, or more, in San Francisco. Now they live in Sacramento.

So I went on facebook, clicked on her name, went into messaging and said call me, then left my number.

One minute later baby, the call came in! I bitch about FB all the time, but at moments like this, it shines!

We had a great talk, it was like sitting right there on the couch with her, passing around a joint, which is now legal in her neck of the woods, thank you.

btw: Sherry's last name is Skogen, thus the nickname Skoge. My nickname was somewhat more complicated. For some reason I ended up with Hymie Lopez, aka: Lopes.

I ran across this old grainy shot from life with Riley as he grew up. I plastered every creative thing he brought over to my place, up on the wall, and all over my fridge. My little studio was right across the street from his high school and thru the woods to his middle school.

I eventually put all of that into a book, which I gave to them a couple years back. 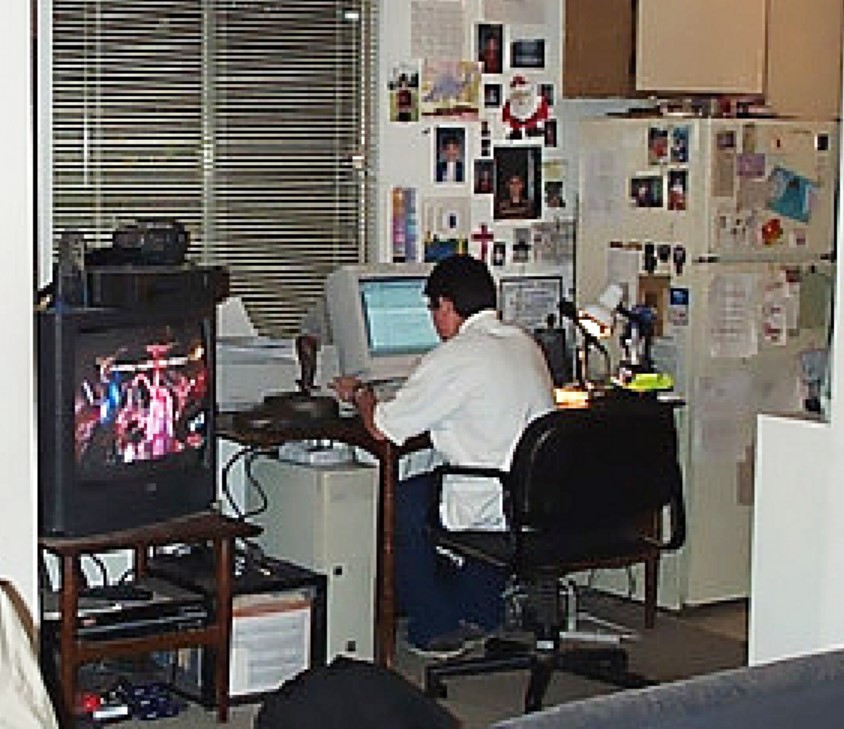 This was about the time we put a fan page of the Spice Girls up on this new thing called the internet. My first dive into html...

I was stopped at a light, coming back from Krogers this morning and spotted a little handmade sign that said "Yard Sale - 128 Jackson St". It was dated today so I got my groceries home, then headed straight there.

Pretty lame, just a few items, with a very short lady sitting behind a table, with a cash box. A little boy and girl were sitting in a nice Jeep under a canopy. I asked the lady how much for the Jeep and kids. Fortunately, she laughed.

I didn't want to leave empty handed, so I shelled out some big bucks for an item, and I now suffer from buyers remorse. 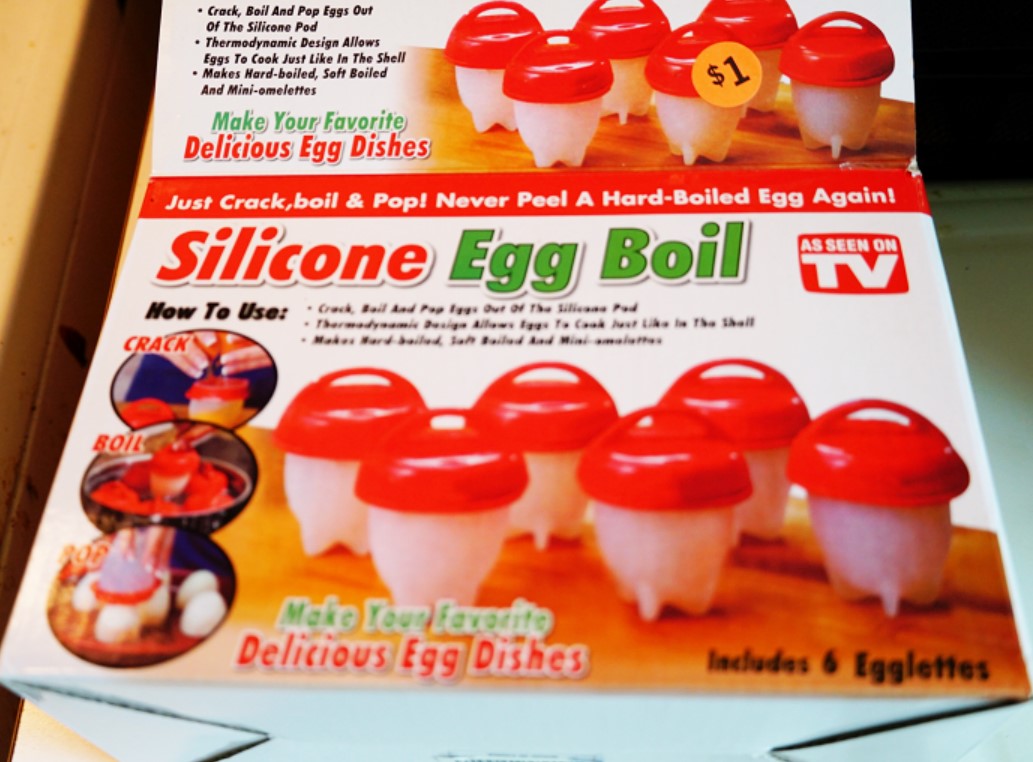 I like eggs scrambled in the morning, but the cleanup is a pain, so I decided to try these egg cooking things out.

I whisked up three quality eggs with a dollop of sour cream, 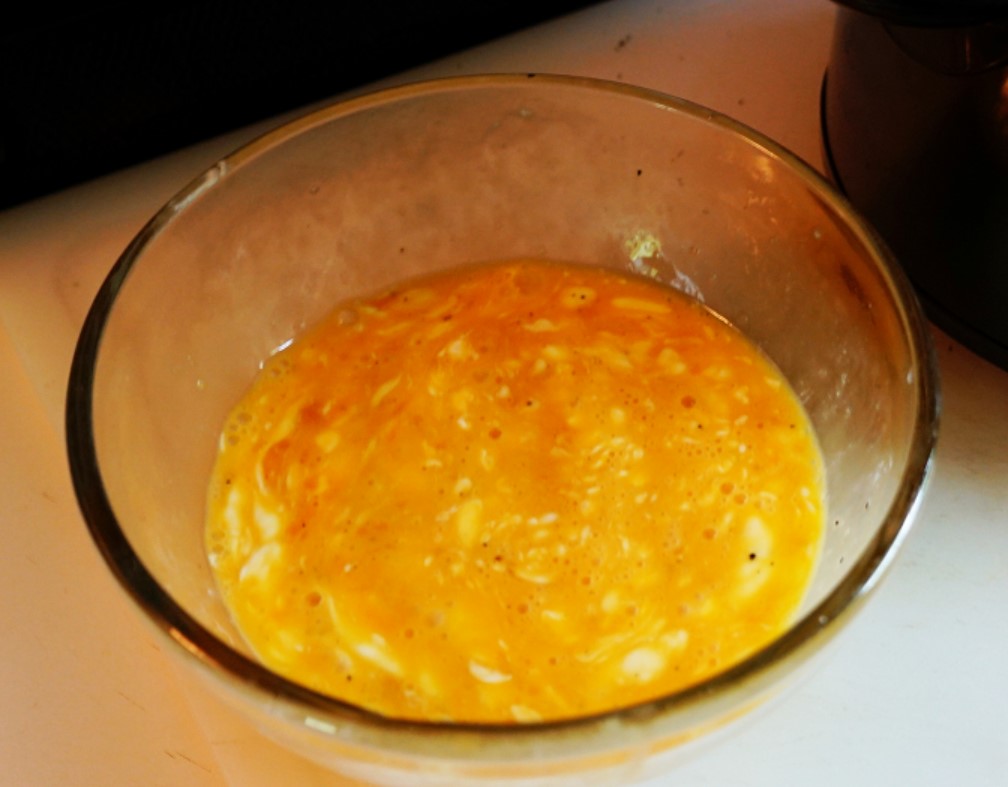 then poured the mixture into three of these little silicon thingys. At least they stood upright on the counter. 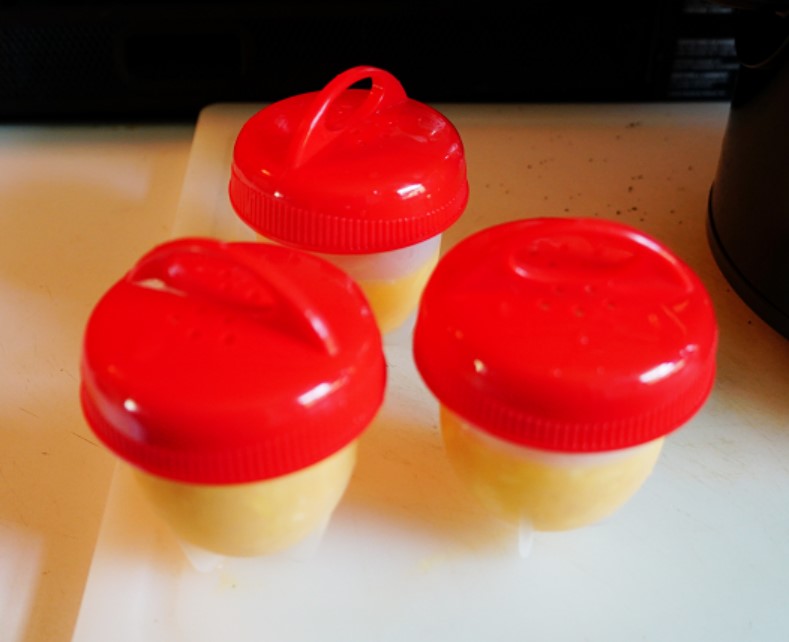 I then lowered them into a pot of boiling water. 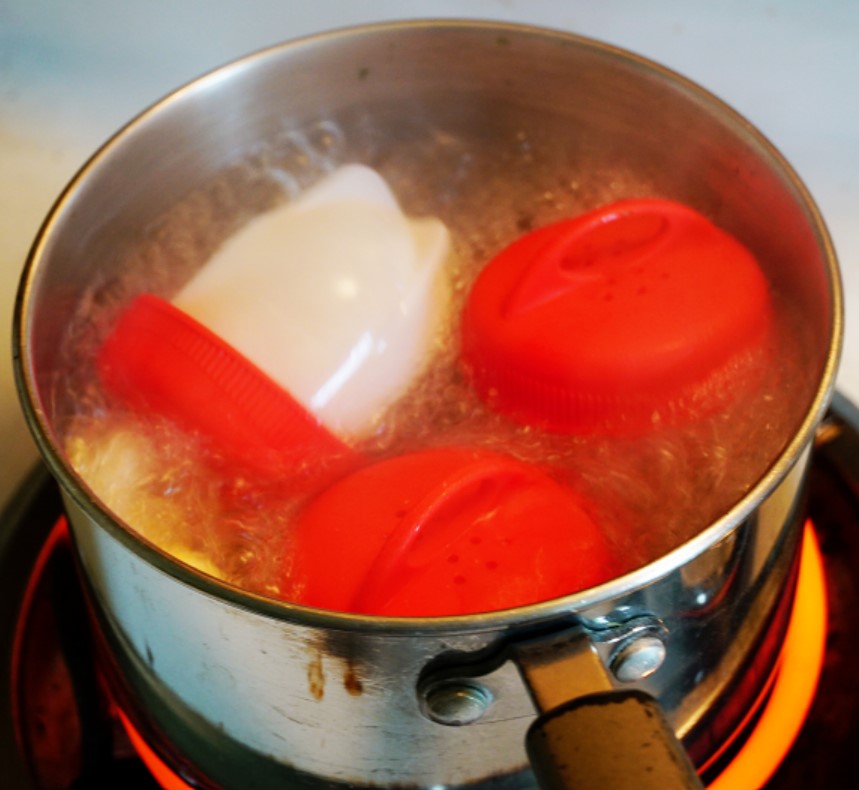 One of them fell over, just wouldn't stay uprite, and the egg mixture poured out of the little venting holes. There were no directions on how long to cook an egg in these Chinese slave worker made pieces of shit. I pulled out the two that didn't fall over, and they were a runny, uneatable mess.

Three quality eggs down the drain, less space in my garbage can, and I'm out a bunch of money...

I've been pushing videos I've shot, up to the internet, since the first day it could be pushed.

I had a prototype computer based webcam in my place overlooking Lake Merritt in Oakland. That's where I shot a great video of me and Riley when he was about three. Riley is 35 now, so that was thirty two years ago.

I've shot a lot of video since, and the best of it goes up to my YouTube channel. I actually have two channels, the other was from years back and contains some old esoteric shit. If you want to see those, drop by...

Here's an old link I just ran into.

Here's another and another:.

Not sure of why I am, when I am, where I am, or who I am. I'm the old leaf rolling down the road in the wind, which will finally crumble into dust, and die a hot death on the highways of America.