My neighbor and I watching ourselves and his sons on YT from the initial space it was created in.

Our new psychedelic staff tank tops arrived today and I got me one. I haven't seen these colors since the Summer Of Love, 1967, in Golden Gate Park.

I've got three skins in the Mega Million drawing tonight, and when they announce the winning ticket being bought from the Taz Mart on the outskirts of Lawrenceburg, TN, and it's me, here's what I'm going to do.

The cash out is seven hundred million plus. Everyone says you need to quickly hire on a management staff to take over everything. Fuck that!

My local bank Capstar, where the inside girls I genuinely like, would gain great notoriety! The town would bloom from tourists around the world flocking to see where the man who won the Mega Millions lived.

Then I would hire a local law firm to take care of all the legal stuff. I would ask around my few friends here and take their advice. The same with an accountant.

Ok, continuing in my little house at the end of a dead end street in southern Tennessee is probably not a good idea.

So, I would find the coolest old mansion around here, with beautiful properties all around, and buy them up.

Then I would invite every friend and family member in my life: daughter, son, grandkids, great-grandkids, sisters, brothers (I have one each) to take up residency around me.

I would pay for their homes and set them up finanicaly. If they chose to accept, I would be surrounded by family, not substance.

Hey, this could be an important document, so I better shut it down and save it...

Man, Parkinsons and Dementia. I've been really forgetful lately, and it almost cost me big time this morning. I walked out to my truck in the rain with an armload of stuff for work, and set my $1,200 Samsung S20 on the roof of my truck while I got everything inside.

Then I drove to work in a downpour along my twisty little back road. I tought it was strange nobody was there yet, but I parked the truck in the shade, and then reached for my phone to clock in. It wasn't on my seat and I yelled "Oh Shit"!

I jumped out and looked on my roof and damned if it wasn't still there. Wet, but there. I pulled the case off and dried everything off, then called Liz to see if we were running today. We weren't, and I would have had all day to back track looking for my phone, in the rain...

I got it specifically for the brown noise generator, which has been established as a sleep aid. I tried it out last night.

Plugged it in, set for brown noise, cranked it up and placed it a foot away from my pillow. Instantly, the noise that I endure throughout the night such as traffic out on the highway through my open window, my neighbors air-conditioner below my window, and my refrigerator noise, disappeared.

I had a great sleep, amazing dreams, and my watch gave me a sleep score of 80. I highly recommend this $26 device!

I've been organizing my office space the last couple of days, which consists of an old desk and a small metal container with a lock door on it.

It's been the catch all spot for patching, storing dead or near dead tubes, life jackets, compressor, and various patching shit. It has been a mess.

I've been gradually pulling old tubes out and determining their status. If they have a big ol gash in them, I'm deeming them patch material and stacking them on the right side. If they're dead from an old patch that has fallen apart, but might be revived, they go on the left. In the middle in the back are about a dozen tubes to be examined, and assigned.

I'm doing this while maintaining our present stash of tubes in use across two big containers. At the end of my day I put the tubes that are not maintaining pressure in the middle, to be examined the next day.

Some tubes just have a slow leak, it might be from an old patch with a bit of air coming out, or a pinpoint hole sometimes impossible to find. Often it's best to just blow them up hard and send them out on the creek for a 2.5 hour run. They'll hold up.

My boss Ricky just dropped by two boxes of new tubes. Fortunately I had space in the new office to store them. I asked our driver Rocco, who really runs the outside show, if we had room for new tubes. He said, after putting those old blue ones into service following Saturdays rush, no.

Ok, this is the current state of affairs in the tube department, at Crockett Shoals Tubing, from the tube manager!

To expand on yesterdays post, it seems to me that when you buy a ticket from a commercial airline, you are establishing a contract with them that states:

We will transport you from this location, at this time, to this destination at this time, for X amount of money, up front. We both understand that emergencies and weather could affect this, but otherwise it our responsibility to fulfill this agreement.

You then plan your life around this contract. If the airline fails to perform as specified, we should be able to sue them. A whole new industry of law firms would pop up, specifically to assist travelers to sue the airlines for damages.

If they over schedule, overbook, or push their people too hard such that things fall apart and your flight is delayed significantly, or worse cancelled completely, they need to be held accountable.

The air traffic controller shortage issue is bullshit. This is a federal agency and the country needs to divert a few billions from the money going to Ukraine, and fix it!

Here's the kicker: you can buy expensive insurance to protect you, if the airlines or the feds blow it. This ripoff industry needs to go away, you shouldn't need it.

We need a new federal law protecting fliers from airline breach of contract!

My flight to Seattle is on Sept 12, departing Nashville at 1017, arriving at 1753, a perfect time to hook up with Brian, and Riley can pick us up from his shop near the airport, right after work. It cost me $500 and change.

It was perfect, until American Airlines changed the terms of the deal yesterday. Now they have me laying over in Charlotte, NC for 5 hours, changing the arrival time to well after 2100!

So I called Priceline and requested rescheduling. The recorded message told me I would be subjected to a $200 charge plus any difference in the cost of the flight. I was starting to fume, shouting what a scam to an empty line.

When I finally spoke to a nice young lady, I explained that arriving at 1700 was critical, I wanted a different flight, and I didn't want to pay an extra dime, since American broke the contract. She put me on hold and I didn't know what to expect.

The best and most critical part was, American waived the $320 surcharge because the change was due to their scheduling, not my whim.

So, I've taken my share of commercial flights, but I am far from a seasoned flyer. I learned something today, perhaps you did to.

Daniel talked his sons Chad and Drew into bringing an amp over and playing some music for the old man on his birthday. Enjoyed the hell out of it! Thanks guys.

What of a way to turn 76! I could have been sitting in a beach bar on an ill-conceived road trip, sipping a cocktail alone, wondering what the hell I was doing.

Instead, I showed up for my job, wore my company shirt for all of one minute, then stripped it off and started patching tubes.

It's Saturday, it's very hot, and folks started showing up in droves! I was patching the down tubes as fast as I could, but we started running out.

Rocco pulled out blue tubes from the container that were flat and hadn't been used since last season. It was hectic, I even found our blue double tube, inflated it, and gave it to a dad and his kids.

Meanwhile, I kept getting birthday wishes, both online and from the staff. (Liz and I are FB friends). My very small circle of family sent regards, and my sister gave me a very generous Amazon gift card.

Now I'm home, cooling down, sipping on a cocktail. Which in this case, beats a strange bar any day!

Every birthday is a milestone when you reach my age. I marvel at it, respect it, and I'm thankful for surviving one more year. But the truth is, where your head is at, is the most important thing.

My head is fine, I'm working, with people I enjoy, and I'm contributing to the happiness level of many folks, every day.

Update: My boss Ricky just dropped by and gave me a family made apricot fried pie. OMG, never had one, delicious! The South is really growing on me. Also, Liz just texted me the count for today, 270 people rode our tubes down Shoal Creek today, beating last Saturday by 22.

Here you go, half eaten: 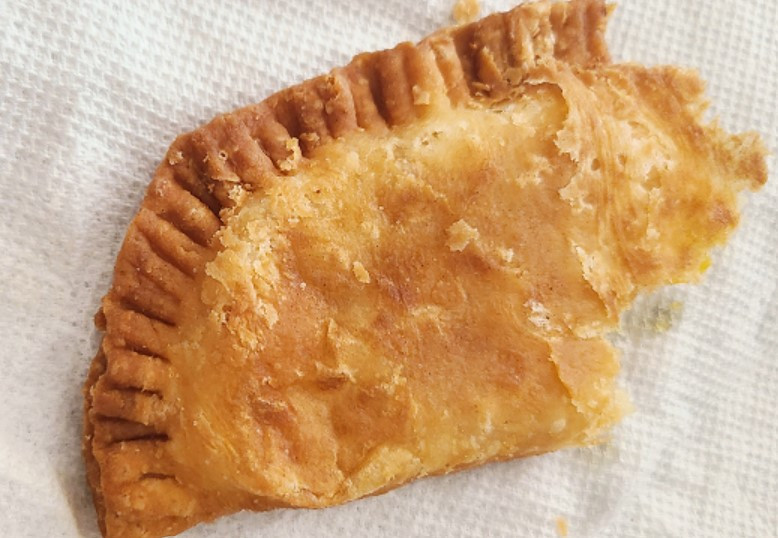