Nothing like a good vehicle emergency to validate a road trip and mine happened this morning. The engine started running real rough and it happened just as I'm coming down that mountainous hill towards Wallace. I barely made it to the exit where I pulled off and she died.

Ahah, I said, it's my Farmers Insurance Roadside Assitance time to shine and I called the 1-800 number on my card. After identifying myself to Farmers with my insurance policy number I was asked if I wanted to start a text session, and we did.

I'm telling a robot via text where I am (just push a button when asked and you're gps is snagged), what the issue is, do I want a tow, yes, here's a few mechanics to try, ok, I'll go with Danny's Lube and Oil and the deal was done. They hooked me up to a web page that showed how many minutes out the tow truck was and that it was taking me to Danny's. It showed up 5 minutes early.

This little shop on the side of the road in mountain country was manned by salty magicians who ran a smoke test on her to check for compression leaks and the poor old girl was leaking like a sieve. There are many rubber caps attempting to prevent previously used connection ports from giving up compression and they get old, melt, break and I carry many in my glovebox. I looked at them of course before calling the tow and they all looked alright.

Garry's guys put some sexy things on top of several of the unused ports. I'll check them out more when I get to Rileys. They even replaced a hose that had cracked on the end and was leaking smoke. Bottom line she's airtight and back better than ever!

Where am I now? Rest area off I-90 about 30 minutes east of Moses Lake. Here you go: 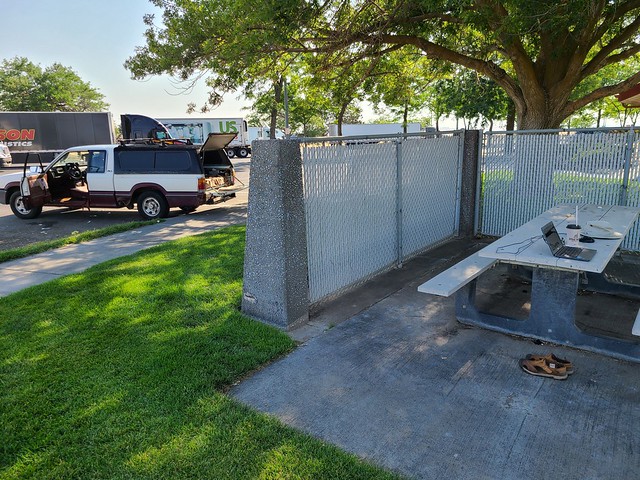